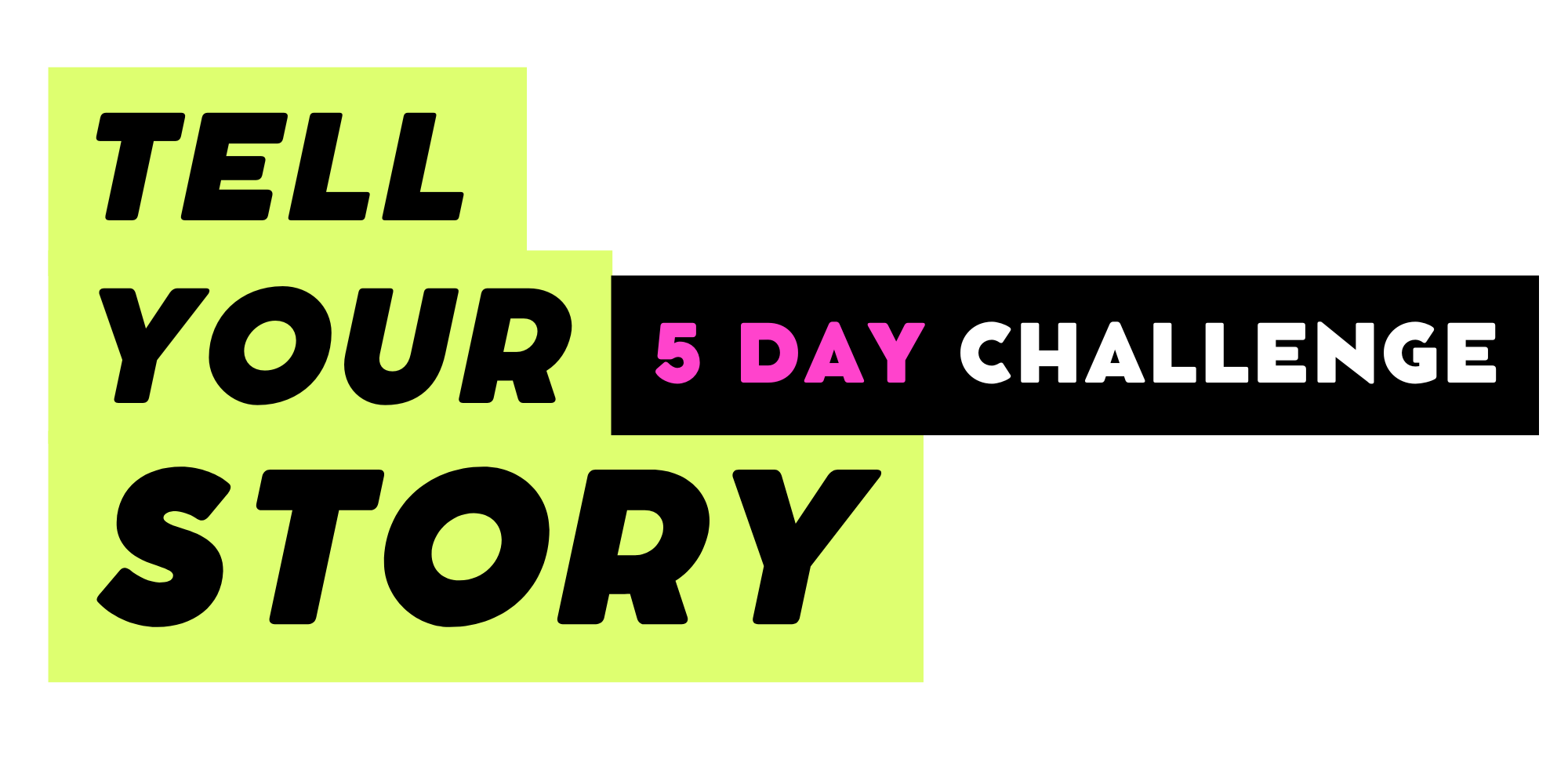 You’re officially confirmed for the Tell Your Story Challenge!

02. Add The Challenge To Your Calendar

03. Send me an IG DM & tell me why you joined the challenge

Become an affiliate
Upgrade Your Experience

What clients say about working with robert 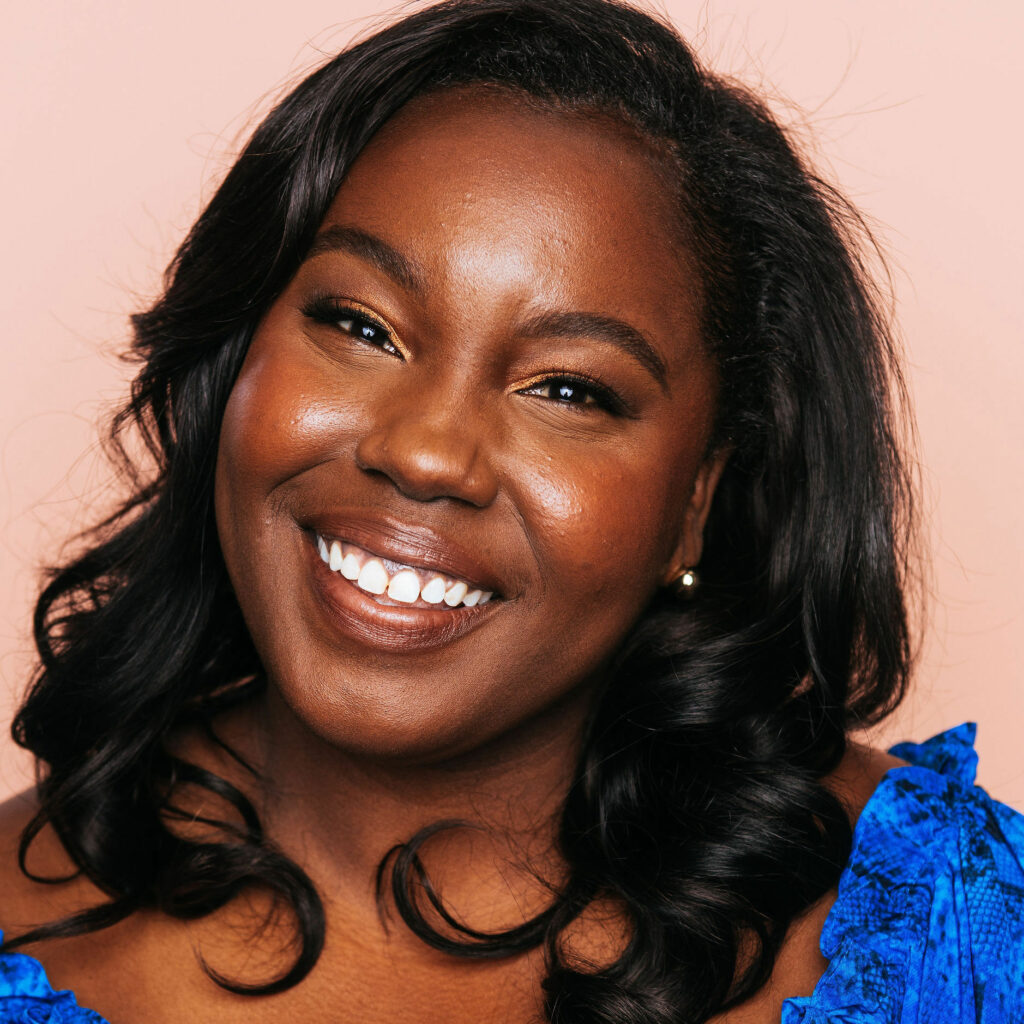 “Robert, I’m just overwhelmed and thankful that you got me to a place to tell this story. This is the authenticity and transparency that I want in the next season of my life and I am so grateful.” 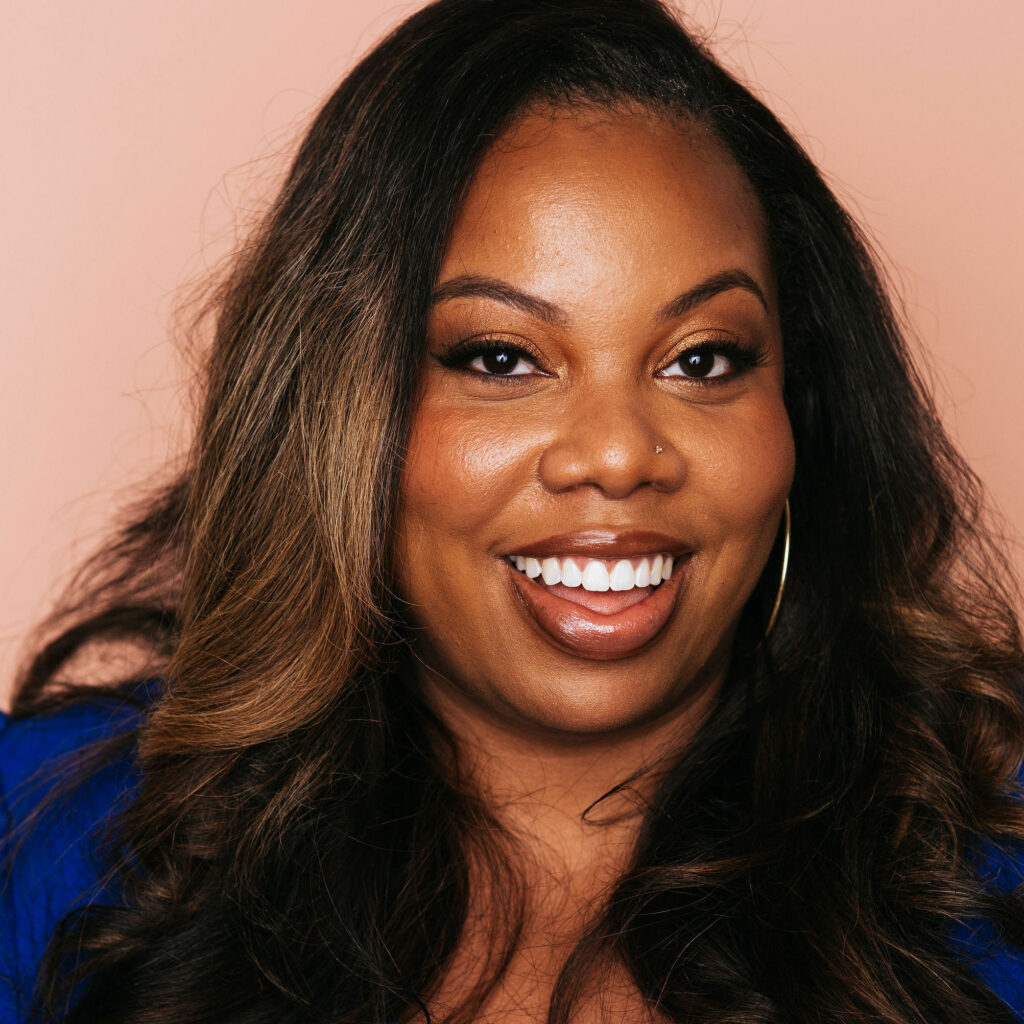 “Robert is truly amazing! He’s very thoughtful and very personable. He is truly in his gift and his superpower is storytelling. Thank you for giving me the space to tell this story.”

Founder and CEO of The Equitist 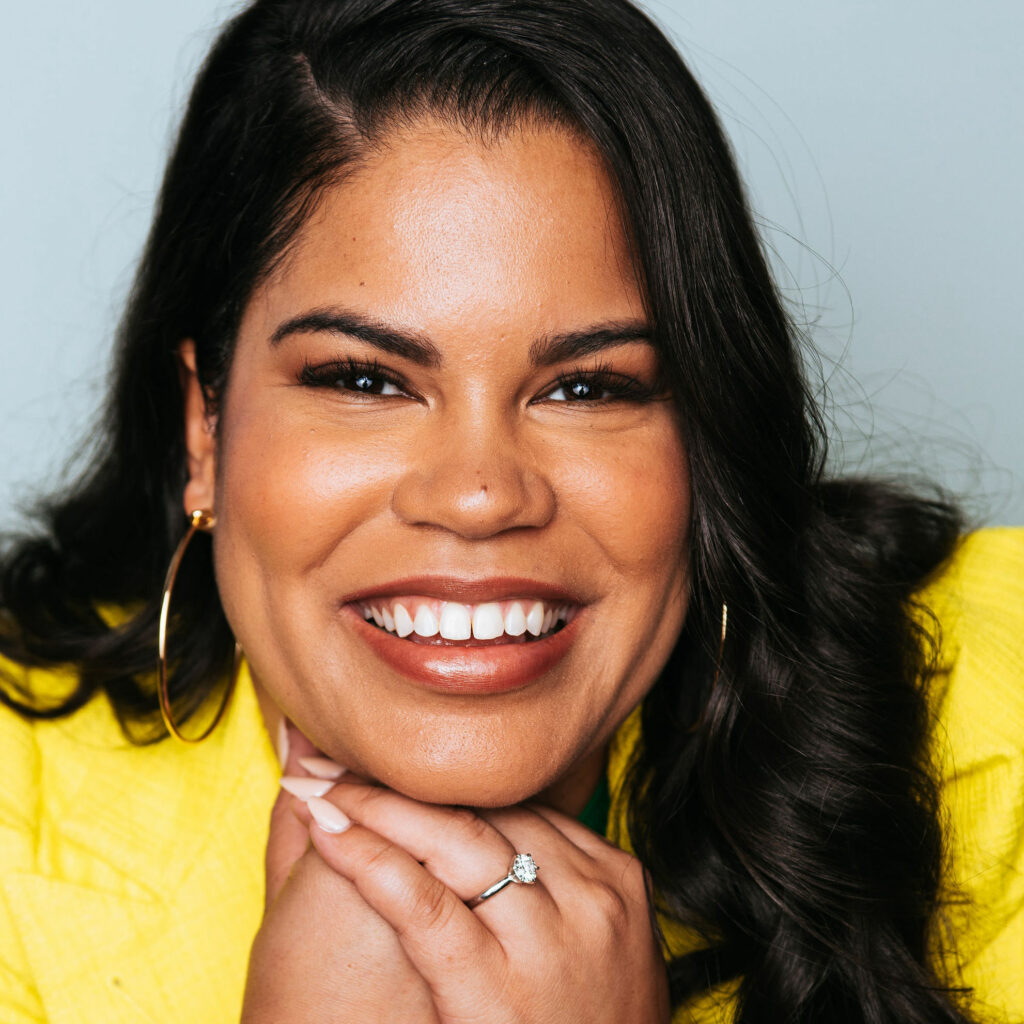 “After working with Robert, it’s such a joy to experience somebody’s true craft.  Robert truly is a storyteller. I have not experienced that before and to witness him work with us in such an intimate way was such an honor.”

CEO of Systems Saved Me

Storytelling As A Money Generating Machine

You are leaving money on the table by not telling your story.  You’re delaying ease in your life and profits in your business because nobody has taken the time to walk you through the direct correlation of solving cash flow crisis through storytelling.

You may think you don’t have a powerful story to tell, but when I uncover the ROI of storytelling I promise you will be quick to find yours.  I will show you the countless places ready to pay you to share your story.

You’ve been taught you’re one funnel away from financial freedom – I’m here to let you know if it’s not connected to an authentic story that motivates your audience to action it will not work.

I’m a helper and you will not leave the first day of this challenge without a fire and focus on how we can turn your situation around through storytelling.

Why Your Story Matters

Many of us are from historically underrepresented communities whether you are disabled, BIPOC, LGBTQIA+, or anyone who has been overlooked.

I say it all of the time – representation matters.  Why?  Because if you don’t see it you don’t believe that you can be it.

You didn’t grow up seeing someone who walks through life like you so you’ve been trained to believe your story isn’t worth being told.  Lies.  And real talk…we can’t let them win. Lives are depending on your story being told.

I’m going to walk you through why visibility matters.  We are going to look at  your audience and the current problems in your business.

I’m gonna get all up in your business and help clear the mental garbage on Day 2 because your story matters. Period.

You might think your life is unremarkable, or that you don’t have any interesting stories to tell. You’re wrong. There’s a powerful story inside of everyone including you. Learn how to mine through your life to find THE story you need to be telling at this exact moment in your career.

I’m going to walk you through an exercise that not only examines the mountain top experiences in your life, but also the valleys.  Nobody likes to talk about the valleys.  But the valleys are where we learn.

Yes, there’s going to be some uncovering, healing, and celebrating on Day 3.

Now that you’ve identified your signature story, write it out. We give you a 3-part framework that simplifies the writing process. If you can write an email or Instagram post, then you can do this successfully.

This challenge isn’t about perfection, but learning and committing to the process.

Practice telling your story. And, learn my “Ready in 5” rehearsal technique: a 5-minute exercise to get you physically and emotionally prepared to deliver your story to an audience. Do “Ready in 5” right before any high-stakes moment, like a pitch, presentation, or livestream.

I spent 10 years as Broadway performer and now direct and choreograph – I’m an expert at coaching rehearsal techniques.

Storytelling is not something I’m going to let you wing.  There is a craft to it and we are going to explore proven techniques to prepare with confidence.

I will then walk you through how you can share your story with a client, student, investor, or journalist to get the highest return on investment from your work over the past 5 days.

Robert Hartwell is a world-renowned expert on Telling Your Story.

In addition to his career as a performing artist, he’s a public speaking coach who helps clients prepare for major opportunities—tv appearances, TED Talks, investor pitch meetings, and more. 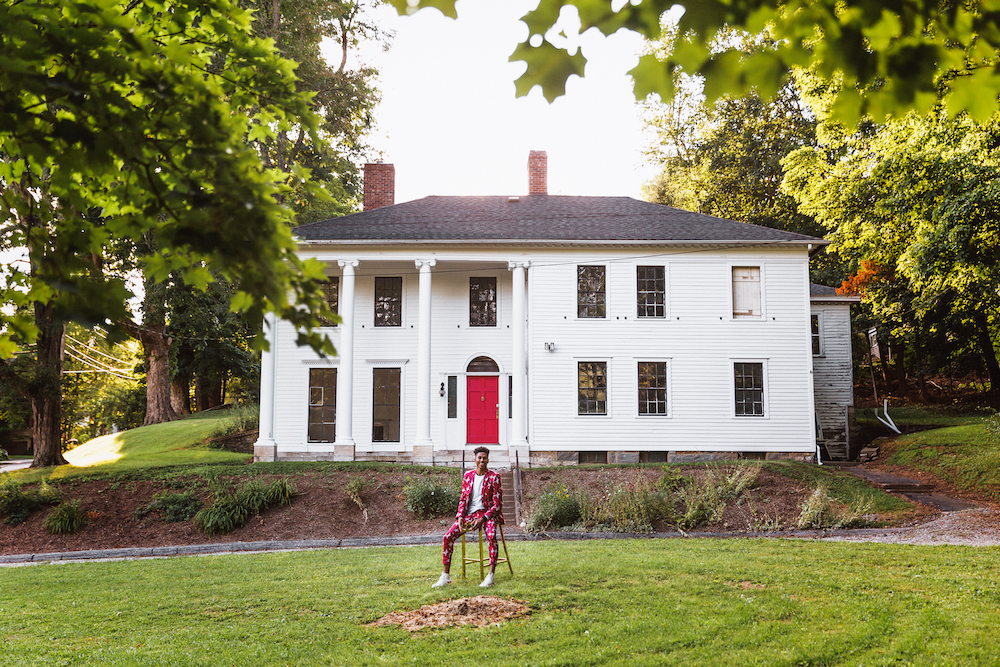 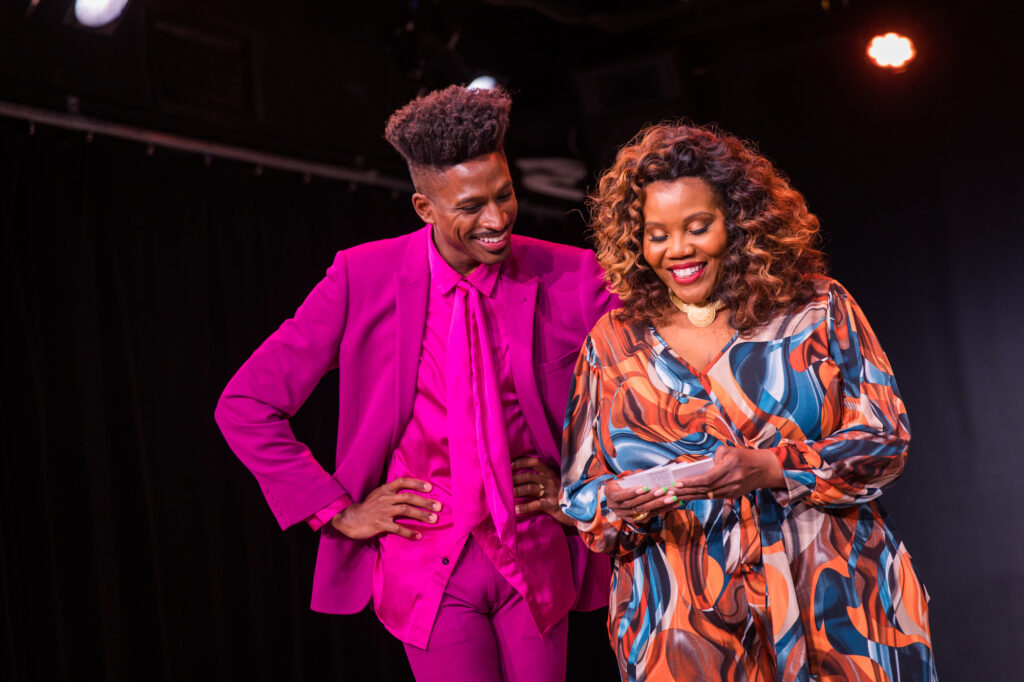 Robert (he/him)  is the host and executive producer of “Taking Back The House” co-produced by the Oprah Winfrey Network and HGTV.  The 6 episode series will air on Discovery+ and chronicle his journey of renovating a historic home built in 1820 with a complicated history.

In 2016, he founded The Broadway Collective which hit the Inc. 5000 list with 440% growth and recently launched a new company Strength On Stages where he is coaching entrepreneurs and VC to tell more authentic stories from the stage.

Robert has performed in 5 musicals on Broadway and 2 National Tours: Dreamgirls, Memphis, Nice Work If You Can Get It, Cinderella,  Motown, and Hello, Dolly! starring Bette Midler. He is also featured in Pharrell and Jay-Z’s latest hit single–“Entrepreneur”.

As a Director/Choreographer his work has been seen at Lincoln Center, Music Theatre Wichita, North Carolina Theatre, The University of Michigan, and Fulton Theatre.  Most recently he directed and choreographed For Colored Boyz  and won the Fulton Theatre’s inaugural Stories of Diversity Playwriting Festival.

He is a member of Actors Equity Association, SAG-AFTRA, and the Tony Award-winning Broadway Inspirational Voices.

Dallin Hals (he/him)  is an event producer & storytelling coach. His mission is to create magical, unforgettable moments that audiences never forget. He loves taking a client’s vision and bringing it to life — exceeding even their highest expectations. Dallin has produced a wide range of events — from multi-million dollar celebrity weddings, to educational conferences with hundreds of students and parents, to national tours with 18 stops across the U.S.

As the Director of Operations for The Broadway Collective, Dallin produced in-person (and online) events that helped the company to hit the Inc 5000 List as one of the fastest-growing private companies in America with 440% growth.

Dallin began his career as a classically-trained Shakespeare actor before transitioning into events and education. Because of his background in the performing arts, he knows how to connect with an audience, tell stories in a grounded + authentic way, and create experiences that people remember for years.

Liza (she/her) is a Sales, Operations and Leadership Coach who has spent the last 15 years working for some of the most recognizable brands including Vera Wang and Design Within Reach. Liza has spent her career building systems and helping sales teams exceed their goals with ease.

In addition to her work with brands and corporations, Liza is a successful entrepreneur who has built a 7 figure business using the same systems, sales and confidence mindset approach she equips corporate teams with.

Elizabeth (she/her) is a certified life coach with a gift for helping entrepreneurs live in their unapologetic authenticity. Elizabeth’s expertise spans over 20 years as she is a natural leader and nurturer.  Her storytelling superpower is empathy. When she works with clients, she deeply listens to their needs and helps pinpoint a story that is not only healing but also freeing.

Elizabeth is the mother of our founder, Robert Hartwell, and was instrumental in helping him create a very successful Broadway career and provide support in building his first multi 7-figure company.

She will help you visualize a larger stage for yourself and how to get your story out with confidence and groundedness.

Desiree Elder (she/her) is screenwriter, Pastor and Executive Director whose work focuses on Black women’s experiences with sex, religion and mental health. She attended Cal State Northridge where she earned a Bachelor’s degree in Journalism with a Pan African Studies minor. She found another love in dance and her journey landed her in the most unexpected of places: New York City and seminary.

In 2012, she graduated with a Master’s Degree in Divinity with a focus on the arts. Since then, she has served as both an Associate Pastor of Innovation and Arts at an unconventional church committed to social justice and the arts, and Executive Director of The Dream Center, a non-profit designed to awaken dreams. Her work has been highlighted in Ebony, Essence, The Daily Post and a host of other places.

PS. A copy of this information has been emailed to you. Check your inbox and reply to me with “got it” so I know you received it!

PPS. You might not realize it (yet) but you have a powerful story to tell. There is someone out there who needs to hear your personal story, your perspective, what you’ve been through, and what you learned. Whose life will be healed or changed, because you found the courage to tell your story aloud?

PPPS. Watch this story from one of our client’s Dr. Lauren Powell who is the President and CEO of The Equitist.  We worked together in our storytelling program Strength On Stages.  Deeply proud of her.  Deeply inspired by her….